Makes one large bowl of oatmeal.  (This is very filling so I split it with my son.)

Mix your oats and milk in a tall 2 cup bowl (a shallow bowl will result in a mess in your microwave). Microwave for five minutes on 50% power. The power is important, because if you microwave on high you will end up with oatmeal everywhere but in the bowl. Keep an eye on it toward the end of the cook time.

Once cooked, add in your nut butter, cinnamon, and raisins, and give it a good stir. Let it sit for a minute or two to allow the butter and raisins to soften. You can add in a bit more milk if your oats are on the drier side. Top with your sliced bananas and almonds, and sprinkle with a bit more cinnamon if you’d like. 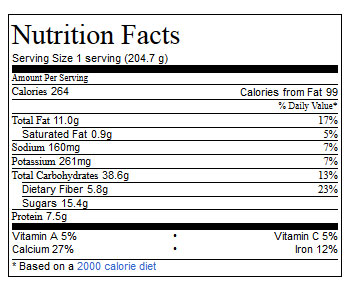 Nutrition facts should be considered an estimate and were calculated as two servings for this recipe, using organic peanut butter. The numbers will change depending on which nut butter you use, and the amount of almonds you top it with.