After posting the recipe for Vegan Vanilla Pudding, I got quite a bit of response asking for a chocolate pudding recipe. I wanted to use cocoa powder rather than melting chocolate chips, because in other recipes my milk free chocolate chips tend to harden once they’re cooled. Adding 1/3 cup of cocoa powder did just the trick, and the result was a smooth, creamy, delicious chocolate pudding. I prefer natural cocoa powder, but go ahead and try it with dutch processed cocoa powder if that’s what you have on hand (the results will obviously vary). I also prefer to reduce the milk by a tablespoon or two and replace it with some strong brewed coffee, but you can leave this out if you’re sharing with the kiddies.

This also froze beautifully for frozen pudding pops, which you can see below.

1/2 – 1/3 cup sugar (I prefer mine on the sweeter side, but if you don’t go with 1/2 cup)
1/3 cup natural unsweetened cocoa powder
1/4 cup cornstarch
1/8 teaspoon salt
2 cups unsweetened coconut milk beverage (I did not taste any coconut using this milk, but almond or soy  could work if you prefer)
1 teaspoon pure vanilla extract

In a saucepan, whisk together the corn starch, sugar, salt, and cocoa powder. Be sure to break up any lumps so that the pudding comes out nice and smooth.

Slowly whisk in the coconut milk over low heat, and continue to stir until the mixture starts to thicken (about 10 minutes). Continue to stir for 2 to 3 minutes until it reaches a good thickness, and stir in your vanilla. Pour into your serving dish or individual dishes.

Let the pudding cool for 10 minutes or so, cover and chill for three hours.

makes 4 – 6 popsicles, depending on the size of your molds 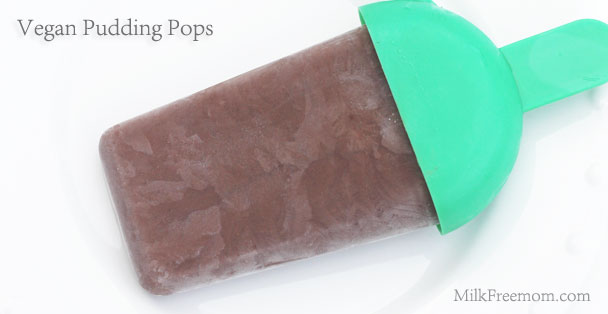 Follow recipe above to make chocolate pudding. After allowing the pudding to cool for ten minutes or so, divide your pudding into your popsicle molds, and freeze for at least three hours. These will become soft quite quickly, so remove them from the freezer immediately before serving.