So my little one was tested through Enterolab to see if he’s gluten intolerant. If he wasn’t his IgA’s would have been under 10, but they were 32!!

So he’s been gluten free for a while, even since before the testing. He was having some issues and we suspected gluten on top of the already prevalent soy intolerance he has. Add that to the fact that he’s dairy free just because we are in a dairy free house, and well… treats are pretty much off limits.

So I went to the store and found a literal wall of Red Mill mixes! So many of them are gluten, soy, and dairy free! We decided to try the chocolate cake mix because we had two parties to go to this weekend.

It’s pretty simple to make, just make sure everything is at room temperature before starting. We used fresh lemon juice and a juice box of rice milk, plus Earth Balance soy free margarine to make the cupcakes. Once they cooled off, they were very soft, tasty, and easy to get out of the paper wrappers. If you ate one and didn’t know it was gluten free, you would NOT be able to tell!

You can check out the line of Bob’s Red Mill products here.

So once our cupcakes were cooked, we popped a few in the freezer to cool them fast while we made up some marshmallow frosting. Found the recipe through Pinterest and just HAD to try it.

The original recipe is from http://veronicahurly.blogspot.com/2010/09/marshmallow-frosting.html

4 large egg whites
1 Cup ordinary sugar (white or brown)
1 pinch of salt
1 tsp vanilla extract
Put the egg whites, salt, and sugar in a double boiler, or a small pot inside a large pot of boiling water. Wisk and stir until completely melted and hot. 5 minutes or so.
The pour this into a VERY clean mixer bowl, and wisk on high for 3 minutes. Add the vanilla about halfway through. If it has trouble fluffing up, then add 1/4 tsp. cream of tartar to help the peaks form.
Put into a piping bag, or a ziplock with the corner snipped, and pipe into cool cupcakes!
Make sure there is no water and no egg yolk in the mix… also I’m not sure how food coloring would affect this. I used organic sugar that was brownish when it melted but when whipped up, it turned bright white.
Enjoy!! 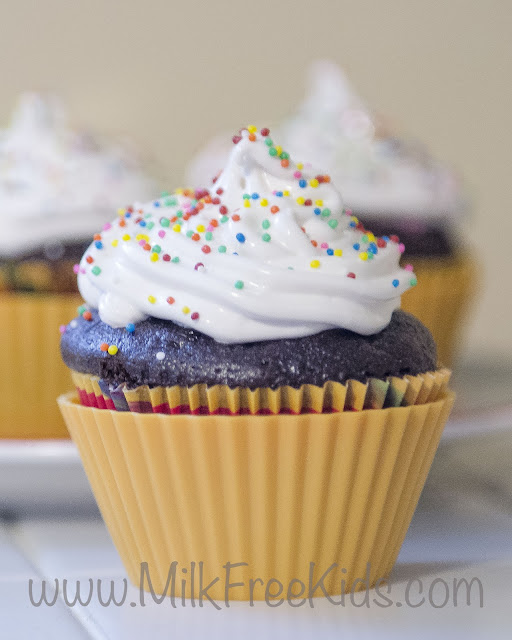